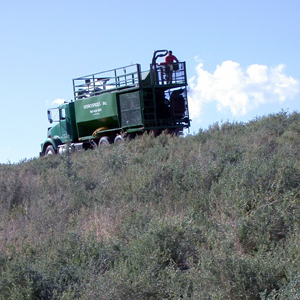 The Standard Hill Mines is a cyanide heap-leach gold/silver mine near Mojave, CA, formerly operated by Shell Mining Company/Billiton Minerals. Mining and leaching operations were carried out from 1987 to 1993. During operations, metal ores were extracted from crushed ore material on the heap by leaching with a re-circulating weak alkaline solution of sodium hydroxide and sodium cyanide. During closure activities from 1993 to 1999, fresh water rinsing of the ore heap with sodium hypochlorite removed cyanide, but left a sterile, crushed gravel pile with no organic matter and high sodium content (no viable topsoil).

The Challenge – Rapid Revegetation of Drastically Disturbed Soil in the Desert

The Mojave Desert, at elevations of 2,000 to 5,000 feet, is considered high desert with extreme wind, water and weather conditions. Temperatures have been recorded as low as 8°F in January and as high as 120°F in August. Average annual precipitation is less than 5 inches. In late winter/early spring, winds in excess of 50 mph are common.

Natural recovery for native vegetation to return to pre-disturbance stature and density typically takes about 30 to 40 years. The use of transplants of nursery-grown native shrubs has not guaranteed plant survival and is more expensive than direct seeding. Prior to Quattro’s efforts, re-vegetation during all (but wet years) was unsuccessful in this area.

The challenge for the Quattro team was to demonstrate that more rapid recovery of native vegetation was possible. The project encompassed 46 acres requiring soil stabilization and re-establishment of native plant species. The slopes were generally 3:1 to 2:1, although some sites were flatter. The seed bed was sterile with no topsoil. The ore-bearing rock had been exposed to ten years of cyanide leaching through it.

In late spring 2003, Shell initiated a voluntary, no-irrigation native plant re-vegetation effort of the ore heap. Quattro brought its team of experts to ensure a methodical site analysis and sound project revegetation plan of attack. Samples of the seedbed rock were collected at specified points on a grid and comprehensively analyzed (not just for N-P-K). Interpretation of the site and soil analyses resulted in a custom blend Quattro Living Soil Membrane, formulated to buffer for soil toxicities and ameliorate mineral imbalances, while simultaneously setting the stage for the re-establishment of a functioning soil community.

Plant seed species representative of the surrounding desert plant communities were selected and supplied from collections in the area. Species were selected to benefit desert tortoise habitat. Saltbush and creosote seed was included with other species, primarily grasses and forbs. The seed blends were planted at the PLS rate of 70 to 80 seeds per square foot. Shrubs were seeded using broadcast method.

The application combined broadcast seeding with mat-drag over dozer-tracked surface and hydro seeding with the Quattro Living Soil Membrane.

The ore heap was re-contoured and seeded in two phases: half in late spring 2003 and half in early spring 2004. By late 2004, all seeded areas began showing seedlings of saltbush shrubs and minor grasses. By spring 2005, saltbush shrubs, minor creosote, winterfat and peppergrass shrubs, and numerous forbs appeared, including forbs self-seeded from surrounding desert areas.

Drought conditions and rabbit herbivory prevailed in the Mojave area beginning spring 2006, resulting in some die-off of shrubs on the ore heap, but the dominant native saltbush-shrub community remained self-sustaining. Despite a persistent drought from 2004-2006, the vegetation survived and then rebounded with vigorous plant growth when average annual rainfall returned in 2007,. As of 2012, the site has a vibrant functioning soil community and the native revegetation continues to grow at a steady rate.