The Hyundai*Kia Proving Ground Track, located just south of State Route 58 approximately 9 miles east of the town of Mojave, is part of a 4,300 acre, $60 million Hyundai/Kia test facility in California City. Vehicles are tested in a variety of conditions including a 6.4 mile oval track, a 2 million square-foot Vehicle Dynamics Area, a winding track and hill road, and various special surface roads designed to replicate highway and road conditions. The proving ground also includes a 30,000 square-foot office complex for its 50 staff members.

The Quattro team of experts was brought in to provide environmental design and implementation management services for re-establishing native vegetation. The goals of revegetation were two-fold: immediate and long-term erosion and dust control, and to satisfy permit obligations pursuant to the Habitat Conservation Plan designed to mitigate impacts to the habitats for the federally and state protected desert tortoise and Mohave ground squirrel.

The Mojave Desert, at elevations of 2,000 to 5,000 feet, is considered high desert with extreme wind, water and weather conditions. Temperatures have been recorded as low as 8°F in January and as high as 120°F in August. Average annual precipitation is usually less than 5 inches. In late winter/early spring, winds in excess of 50 mph are common.Natural recovery for native vegetation to return to pre-disturbance stature and density typically takes about 30 to 40 years.

The use of transplants of nursery-grown native shrubs has not guaranteed plant survival and is more expensive than direct seeding. Prior to Quattro’s efforts, re-vegetation during all but the wettest years was unsuccessful in this area.

The challenge for the Quattro team was to demonstrate that more rapid recovery of native vegetation was possible on this drastically disturbed site.

In December 2004, revegetation was initiated on 108 acres of excavation cuts and man-made hills with slopes. No topsoil had been stockpiled during construction. Extensive sampling of the seedbed was undertaken to develop a comprehensive understanding of the growing soil challenges inherent in re-establishing a functioning soil community. The soil was so fine and nutrient-deficient it was referred to as moon dust.

Two native seed mixes were used on the site, selecting species that occurred within each of the resident plant communities: Creosote Bursage Community mix @ 12 PLS lbs/acre and Saltbush Scrub mix @ 11 PLS lbs/acre. The highest percentage of seed within each mix was of early seral stage, rapidly growing pioneer species that were collected locally.

Above average precipitation during the 2004-2005 winter months provided a boost to the hydroseeded areas and germination rates were exceptionally high during the spring of 2005.

The Hyundai site continues to flourish eight years after initial revegetation. And despite some of the hottest weather on record and a sustained drought, the variety of plant species is growing and the plants are thriving. In fact, Hyundai has had to cut back growth from certain areas of its test tracks.

Although the Hyundai site was cleared of desert tortoises and fenced to keep tortoises from coming onto the site, the success of the revegetation methods used have tremendous significance for the survival of the tortoise. These methods clearly demonstrate their use as a standard for revegetation efforts on projects where restoration of habitat for the tortoise and other desert wildlife species is mandated or desired. 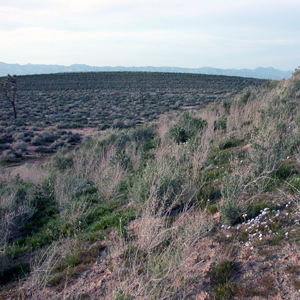